“Build the wall!”; “Drain the swamp”; “Repeal and Replace”; “Lock her up!” – all stock phrases from the campaign trail as Donald Trump moved from outsider-challenger for the US Presidential Race to White House incumbent. During that race he promised to clean up Washington, secure American jobs and the nation’s borders; stop being the policeman of the world and, of course, “Make America Great Again” (although given that slogan was lifted from Reagan, perhaps it should be “Make America Great Again…Again!”).

By most measures, POTUS 45 hasn’t got off to a great start. The centrepiece American Healthcare Act stalled in Congress – a poorly-drafted, seemingly un-costed, ill-thought-out piece of legislation. Travel bans have met judicial rebuff not once, but twice. The Budget request may fall foul not just of Democrats in Congress but of a substantial slug of GOP members too. Mexico will not pay for the Great Southern Wall, and Trump’s foreign policy, so far as it exists, rests on gunboat diplomacy, gesture politics…and alienating  past friends from Australia through Canada to the UK via Japan – never mind bamboozling China (and even NATO) with his flip-flopping.

As we head for April 29th’s 100th Day, Trump the President looks ever more lost in the Oval Office. The frequent trips to Mar a Lago; the circling of the wagons ensuring the family, most notably Ivanka and Jared Kushner, are the first to have his ear; the validation-via-ratings tweets and the sheer lack of coherence coming from the Executive all point to a POTUS who just isn’t enjoying the job. Should we be surprised? No. For Trump, his success has all been about making the deal – not hanging around to see it implemented. That’s tough. That’s long hours. That’s boring. 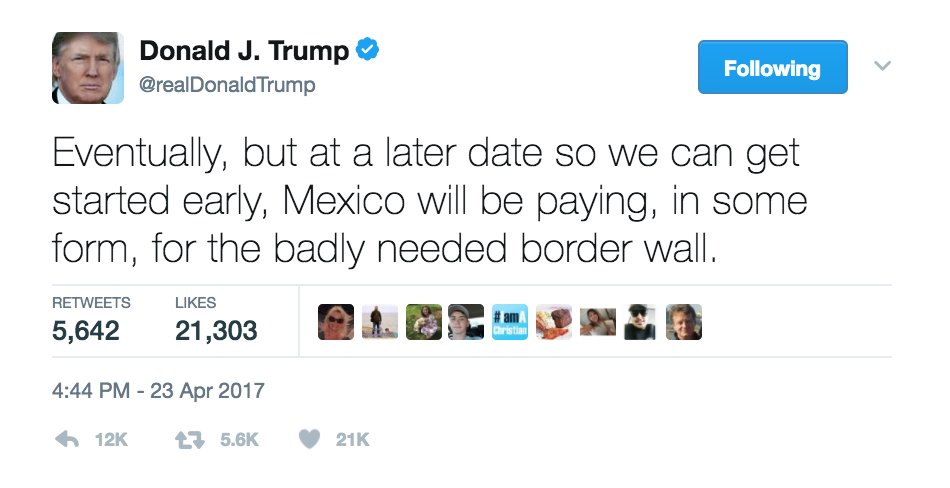 It’s easy to deride Trump’s failures, but it is equally wrong to claim that his time in office has been a total failure on his terms. He has achieved some ‘success’ in the areas where the Executive rather than the Judiciary or Legislature hold sway. The appointment of Associate Justice Neil Gorsuch is the cornerstone achievement so far. An executive appointment, he needed Confirmation from the Senate, and even saw the GOP change the rules from a Super to Simple majority to make that happen. While no-one yet knows what kind of Justice Gorsuch will be, his relative youth, and potential to influence other Justices, notably Justice Kennedy in coming years could lead him to be an influential figure for decades. Pretty much from the off, his influence will be seen in another area of high executive influence – Regulation. As a political and judicial conservative and textualist, he’s more likely to be sceptical of government regulation than a more liberal appointment, such as Obama’s failed SCOTUS choice, Merrick Garland. And repealing regulation, especially such regulation as we see as the Obama legacy, is the other area that has borne most fruit for Trump so far.

Whether it’s removing the roadblocks from the Keystone Pipeline development or withdrawing from the TPP trade agreement, Trump has delivered on his campaign promise; he has lifted restrictions on coal production and has started a new round of deportations of criminal illegal immigrants.

But, in terms of his contract with America, he has hardly even ticked off the page one items yet. But the time Saturday rolls around, he needs another major success – not least to lift his approval rating which languishes at the disaster level many liberals predicted. There’s a rumble that a revised American Healthcare Act may be ready to speed through Congress. But that would be a huge risk. And funding for the Wall is absolutely not guaranteed as all sides scramble to agree a Budget by close of business Friday. So the president may look to foreign policy as a source of success – making a big bang without, one hopes, making a big bang.

The only upticks in Trump’s approval rating have come following the kind of military intervention he vowed not to undertake during the campaign – so again, any further rocket attacks on Syria or MOABs on anywhere actually run the risk of alienating his base. But there’s a little five letter word that seems to be bouncing around at high speed in the Trump brain: Korea. Maybe it’s to a West Side Story tune: “Korea, I just dropped a bomb on Korea…” (with apologies to Bernstein and Sondheim.)

Back in 1952, Eisenhower won the White House and cemented his 100 Day success through the simple phrase: “I shall go to Korea.” (1) He made the speech in October and returned to US military front lines a month later to carry out his pledge. He immediately realised that no tonnage of armaments or sabre rattling would drive the North Koreans (and Chinese) from the peninsula to ‘win’ the Korean war for America. Once elected, Ike’s first 100 days were focused on his long-term strategy of Waging Peace; first and foremost in Korea. He fought his own generals and Cabinet team to ensure the Armistice was put in place. That it’s still there in 2017 is testament to the man.

Trump doesn’t understand Korea. he doesn’t understand foreign policy and seems to think the answer to every question is flexing the military muscle. He has never been a general, not a sergeant nor, thanks to a Vietnam medical deferment, not even the most lowly grunt. Thus one must question whether this Commander in Chief is in any way qualified to act.

For Trump, success is ratings: it’s headlines with his head in full frame. Korea could deliver that big-league headline. But if one thing has emerged across the last 100 days, it’s the growing influence of real generals – Generals Mattis and McMaster are no great friends to soft power, but they may just carry enough clout to stop Trump playing event politics with Kim Jong Un.

Trump may desire a big bang finish to the first 100 days. I’d happily settle for a whimper.