Two macroeconomic stories have adorned the main headlines on the BBC website in the last 24 hours.

First, Mark Carney, current Governor of the Bank of England, ruled out interest rate rises in the near future – highly unlikely in 2016, it seems. Then this morning the news is that unemployment, the number of people not in work but seeking work (hence counted as part of the labour force) is at its lowest level since 2005.

As with many economic variables, a change in any direction is not unambiguously a good thing; for interest rates, which have been low for many years now, this is good for borrowers (for example, people with mortgages to buy houses), but bad for savers. This is because the rate the Bank of England sets heavily influences the rates set by banks around the country, so borrowers will continue to have to pay back their loans on lower interest rates, but savers will continue to earn very little interest on their savings.

The reality that the Bank doesn’t think a rate rise is likely implies the Bank thinks the prospects for economic growth are not so great; this comes on the back of the Chancellor’s warning about a dangerous cocktail of factors affecting UK growth in the coming year. Prospects for growth have reduced.

This comes, though, in stark contrast to the good news from the labour market. That unemployment is falling is generally a good thing – it’s hard to think of particularly convincing reasons why it wouldn’t be. Sometimes people point out that the fall might be based only on workers going into short-term or zero-hours contracts, or part-time or self-employment, all of which are seen as less secure jobs for workers, and signs not of high confidence amongst employers.

It may also be that some are back to work, but the 5% that remain have been out of work for a long time and are starting to become discouraged. If people have stopped looking for work, they stop being classed as unemployed and hence the unemployment rate can fall due to this. It is quite standard that after recessions the number of long-term unemployed increases, and while this does not excuse the reality or make light of it, it does present a problem for the government in attempting to find policies to get such people back into the workforce.

Yesterday US President Obama gave an annual speech that US Presidents give, called the State of the Union address. Conservative thinkers here think that David Cameron should initiate a similar thing, but that’s by the by. The BBC reports that Obama’s final SOTU (everything it seems gets an acronym in the US) conveyed a message regarding optimism and anxiety.

You may think trivial emotions like optimism and anxiety are utterly irrelevant when it comes to how economic outcomes are determined, but you’d probably be wrong. Indeed, one of the early Keynesian business cycle theories that we’ll cover later in term suggests that co-ordination failures occur because some people are less optimistic and hence don’t do particular things (e.g. produce less thinking they won’t sell all that much), leading others to do the same – the pessimism of some is contagious.

The antidote to such failures of co-ordination might be more co-ordinated positive speak – such as Obama encouraging everyone to be optimistic. It sounds almost silly, but what is the empirical evidence? Here’s some bedtime reading on the matter, work by an economist called Sylvain Leduc who considers business confidence and economic fluctuations. Work I’ve been doing myself suggests that the Bank of England’s Monetary Policy Committee, which determines monetary policy (the setting of interest rates to achieve an inflation target), pays a lot of attention to business confidence when considering the state of the economy.

While our focus is often just on what the Bank of England is up to (speaking of which, today is December’s interest rate announcement from the Bank of England), there are other more important central banks out there, most notably the European Central Bank (ECB), and the Federal Reserve, representing the eurozone and the US respectively.

This article in the Guardian worries about what seems likely to happen this month: the US will tighten monetary policy while the ECB will loosen policy further.

Why does this matter? The worry is of considerable exchange rate movements. As we’ll learn towards the end of next term, one of the ways in which we believe exchange rates move in the shorter term as economists is via relative interest rate movements. This is because rates of interest reflect how much an investor could earn by moving their wealth into that country.

Hence, everything else being equal, if interest rates are higher in the US than in the eurozone, it is feared people will move their wealth out of European assets into US-based assets, increasing the demand for US dollars, and reducing the demand for euros. This would then lead to an appreciation in the value of the dollar (more demand), and a depreciation in the value of the euro (less demand). This need not be a bad thing, since a recovering economy ought to be aided by a weaker currency.

Of course things aren’t necessarily that simple; if eurozone producers use goods imported from the US to make their goods, and if eurozone consumption is often of US-produced goods, then eurozone economic activity would likely be negatively affected by the movements.

Why does this matter? It matters on a number of levels; to mention a few: 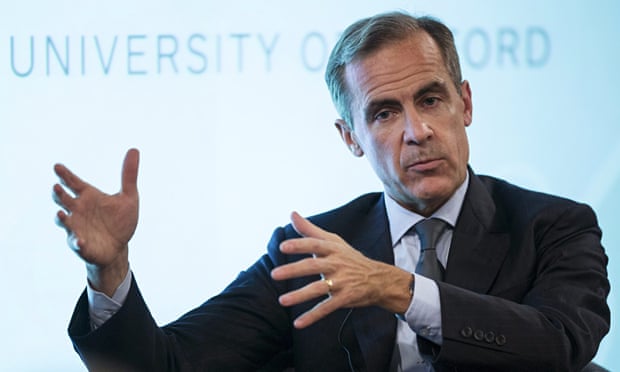 This week the Bank of England Governor, Mark Carney, gave a speech on the EU in Oxford. It’s well worth reading the whole thing, rather than the various responses to it. It’s not particularly long, and there’s even a bit of humour injected in places.

Firstly, why does it matter that the Bank of England Governor has given a speech? It matters because he is head of the institution tasked with carrying out monetary policy – what happens to interest rates, essentially, to keep inflation at around 2%, and also financial regulation – to try and ensure another financial crisis doesn’t occur.

What is the context? As you’ll be aware, the UK is holding a referendum by the end of 2017 on its membership of the EU. The UK, as a very open economy, is highly affected by international events – both good and bad. At times, high demand from Europe and elsewhere has helped drive UK growth, but at other times instability in neighbouring countries has inhibited our growth. Additionally, it means our policy decisions affect others in the same way that many decisions we make on a crowded train impact those who happen to be sat/stood near us.

What did Carney have to say? Essentially, he said that the founding principles of the EU: freedom of movement of goods and services, capital and labour, have been a good thing for the UK economy. These are arguments we’ll cover in much more detail next term, but here’s some food for thought in the meantime. However, he did add caution (something Eurosceptics have been quick to seize upon): financial regulation may threaten the UK economy in the future, as may the unwillingness of other European nations to reform and become more competitive.

All things we’ll be talking about in much more detail in the Spring: see you then!