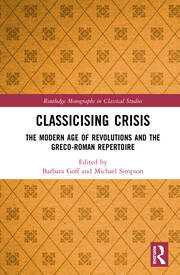 Some important modern political movements call on us to ‘decolonise’ the discipline of Classics and reframe it with less of an emphasis on ‘dead white males’.

This is a positive way forward, but we should not forget that the literature and culture of antiquity, in all its diversity, has repeatedly been used to to explore radical political themes and even to promote revolution.  The American founding fathers, who wrote the Declaration of Independence and broke away from monarchical British rule, modelled themselves explicitly on Republican Rome. The leaders of the French Revolution took inspiration from Plutarch’s Lives; Madame Roland, an influential political writer, took Plutarch into prison with her, and regularly compared herself to the heroic figures of antiquity.

Less well-known is how after the successful revolution on Haiti in the 1790s, ancient history was taught in the new schools for ex-slaves; or how Greek women, in the aftermath of Greek independence from the Ottoman Empire (1821), laid a claim to education and citizenship by invoking the figure of Antigone.

A new collection of essays, edited by our own Professor Barbara Goff and her regular co-author (and husband) Michael Simpson, of Goldsmiths, University of London, explores how texts and figures  from classical antiquity have been put into play in order to investigate, explain or promote radical political movements at various crisis points.  Classicising Crisis: the modern age of revolution and the Greco-Roman repertoire (Routledge, 2020) is international, gathering scholars from the UK, USA, Greece, and Poland, and it spans the disciplines of Classics, History, Politics and English.  Dr Rachel Foxley of Reading’s History Department is one of the contributors.

As well as the USA, France, Haiti and Greece, the collection looks at Latin in political pamphlets of the English Civil War, heroic poetry in the failed revolution of Italy in 1848, popular classics in the Soviet Revolution of 1917, the radical left-wing movements in Germany in the 1970s, and representation of the financial crisis of 2007-08.

Where will your study of antiquity take you?  What radical discoveries will you make? The ancient world that we study at Reading is full of surprising possibilities!