The huge flows of displaced people across Europe continues, and is likely to continue for many months, irrespective of the interest the news media outlets attach to it. This morning the headline is that the EU has secured a deal with Turkey on refugee flows through that country. It appears that the EU wishes to ensure refugees remain in Turkey rather than entering the EU.

It’s perhaps worth pointing out the numbers of refugees registered (likely a fraction of the numbers in countries), in the following info-graphic: 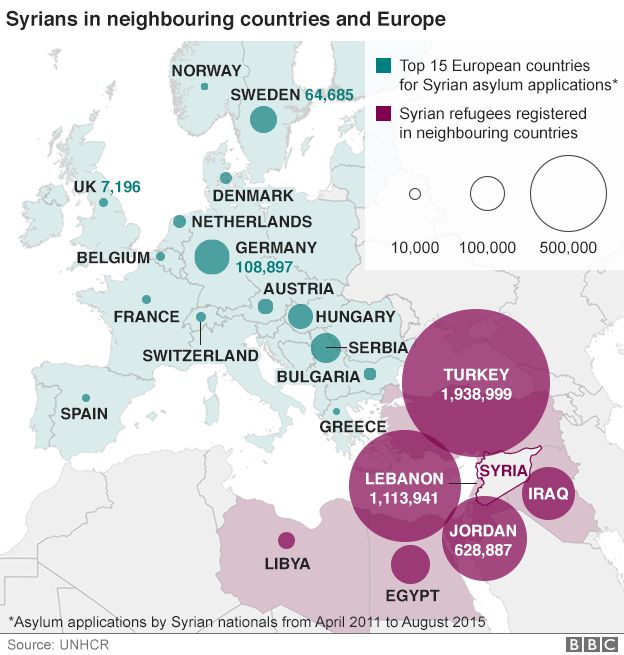 Turkey already has about 2m more refugees within its borders than even the EU’s most generous country, Germany, and probably has more than the entire EU put together. Turkey is also a much poorer country than most parts of the EU, Germany in particular, and hence it’s quite likely that the impact on that country is dramatically more than what any EU country can complain about.

Nonetheless, the essence of this deal appears to be the EU telling Turkey that they’ll give a load of concessions, even lots more money, if they can just keep all those millions of refugees within their borders. The Guardian talks of “repressive” border measures, while the BBC’s report makes no mention whatsoever of what Turkey might do to keep the refugees within their borders.

Why does this matter for macroeconomics? Very simply, it must affect the various macroeconomic numbers we are interested in. Here in the UK, GDP growth has been mainly driven by population growth due to migration for a number of years now – we can get this sense by looking at the difference between GDP growth, and GDP per head growth (0.7% and 0.2% respectively from here). Refugees will be added to the population, and also to the labour force in the countries they arrive in.

If the supply of labour is expanded, the instinctive reaction is to ask about the impact on the price of labour; many worry that wages will be forced down. Most studies that have looked at this (see these search results as a starting point) have found that the impact isn’t negative on native workers, apart from those at the lowest end of the market – unskilled labour. The reason the effect isn’t negative on wages is that the effect is not static – it’s not a one-off impact on the labour market. New entrants to the labour market ensure many vacancies are filled, leading to more being produced, more incomes being earned, and hence more demand for labour to produce more things that people want to buy with these higher incomes.

The impact on unskilled labour from immigration (or from refugees, and it’s hugely important to be clear about the difference – in fact from here, we should probably refer to most refugees in Europe as displaced people) is probably negative: migrants are often more willing to do those jobs, and at a lower rate of pay. However, migration is not the only source of pressure on unskilled labour; machines are probably a much more likely source of their problems, as many basic jobs are now being done by machines, or robots.

We’ll spend time next term looking at globalisation and its impact on the UK economy, in week 4 of term. In the meantime, you can look at Chapters 8 and 9 of our textbook to get a head start, if you want to…