By Dr Mark Shanahan, Lecturer in Politics and International Relations Deep Space Gateway in lunar orbit as proposed in 2017

This week, in the run-up to World Space Week, NASA announced a long-term co-operation project with Roscosmos, the Russian space agency to develop the Deep Space Gateway, a manned space station orbiting the moon.

The US agency sees this project as a stepping stone towards a manned mission to Mars. While of course there’s no detail, no dates and no certainty that this project has any more certainty than the mirage of the Southern border Wall, it’s a quite different take on space exploration by the Trump administration.

While Barack Obama favoured deep-space unmanned scientific missions, POTUS 45 is harking back to space as an adventure land for man – a view that went out of fashion shortly after Richard Nixon spoke to Neil Armstrong on the moon back in 1969. For Trump, politics is all about campaigning, and campaigns are built on set-piece events that snatch the attention of the public from the administration’s troubles…and of course, beyond the handshakes in space, he has quite a few troubles with a Russian accent. 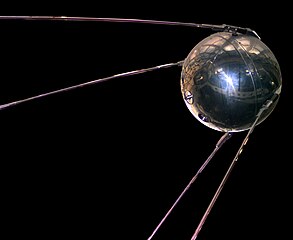 A replica of Sputnik 1, the first artificial satellite in the world to be put into outer space: the replica is stored in the National Air and Space Museum.

So World Space Week provides a perfect distraction from the disharmony of Trump’s foreign affairs that lurch without strategy from one bombastic statement to the next tension-heightening miss-step. The symbolic week is bounded by two major space history anniversaries.

The first, on October 4, marks 60 years since the launch of Sputnik 1. The second, on October 10 marks the UN’s Treaty on Principles Governing Space Exploration and the Use of Outer Space which brought some codification around mutual assistance and co-operation in Outer Space exploration. It did little to stop the race for prestige in space which, after a series of Soviet spectaculars, was ‘won’ by the USA when Armstrong first stepped on the moon.

But it’s the first anniversary that interests me most – not least since I wrote a book about it (Eisenhower at the Dawn of the Space Age, Lexington Books, 2016) which charted the US reaction to the USSR putting a man-made object in space for the first time, in light of America’s longer-term and slower-burning rocket and missile strategy.

When Khrushchev gave permission to his ‘chief designer; Sergei Korolev to aim one of his R-7 rockets not at Washington DC, but into space, and to top it not with a nuclear warhead, but with a satellite containing a simple beeping radio transmitter, he had little thought of the effect it would have on his ideological rival.

To be fair, Eisenhower knew the launch was coming and knew it would not change his own ‘new look; defence strategy ‘one iota’. But the US was briefly shaken. For once it was not achieving spectacular firsts. And in the media at least, there was a sense that the ‘free world’ was under threat. Under Ike, cool heads sensibly prevailed. The threat subsided fast and Khrushchev the showman was never able to achieve the same again.

Perhaps now the roles are reversed? Trump is the showman, the huckster, the charlatan peddling a version of America that’s little more than smoke and mirrors (or the beeping of a 184lb silver ball). Perhaps Putin’s now the calm one, playing geopolitical chess while Trump blusters; undermining American democracy not from space but cyberspace. These days if America fears rockets, it’s North Korean rather than Russian ones. The Soviet ones were never a threat. By abandoning diplomacy for spittle-laced rhetoric, Trump has raised the real threat from Pyongyang.

The launch of Sputnik 1 paved the way for the great space age. Talk of The Deep Space Gateway may simply be hiding an unbridgeable rift.