Humans throughout history have dedicated immense amounts of energy to understanding forests. When we think of human-forest interactions, often cited are the direct products we take from forests, the indirect benefits environmental services and the issues of sustainability. Yet rarely mentioned is the psychological relationship we have with the forests and the potential implications on forest management. In this blog I take a mythological Jungian approach in analysing the history of Tropical Palaeoecology, so we might better understand the unique psychological link that the West shares with Amazonia. This blog is part 1 of 2. It is a briefing of my ideas and as a result touches only shallowly on the highlights of my thinking. I hope to go deeper into these thoughts in future blogs.

The way we perceive the world has been shaped by our evolutionary history within and later outside of the forest environment. In negotiating trees, we started to see in three dimensions, so we would not fall from branches. It was only when leaving the forest that we broke free of our primate shackles, stood upright and became Homo sapiens. As a result, the dualistic nature of the forest as both a nurturer and tyrant are burnt deep into our subconscious.

Forests have symbolized Western philosophical ideals for hundreds of years. They are intimately associated with being and growing. As the largest, strongest and most long-lived of things, the tree stands as the immanent symbol of the solid Earth we occupy. Think of the great tree Yggdrassil which makes up the Norse cosmos. Stead-fast ritual agreements traditionally occur around trees. Within Germanic tradition, for example, the forest is a place where men and communities make truce with their enemies, where lovers come to meet in secret and where the proverbial hatchet is buried.

The ash Ygdrassil is an immense tree that connects the nine worlds in Norse myth (Illustration by Friedrich Wilhelm Heine).

Yet, at the same time, the forest is closely tied to chaos, fear and dread. They are often dark, closed in and imperceptibly complex. It is the habitat of the predators that plagued our ancestor’s lives. Uncoincidentally it has become the setting where symbolic monsters dwell, like demons and dragons. Within mythology, psychology and theology, as according to Jungian interpretation, the path towards self-discovery can only be achieved by entering the unknown land and slaying the beast that lurks within. In olden days the geographic frontier and the psychological frontier were the same thing, the forests that stretched out indefinitely. We have been physically close to forests throughout our evolutionary and cultural history, but it is still a place that is not quite reachable or understandable given its abstract ecological nature. So, the forest has been for the longest time a realm of chaos. It is the antagonist of order on the physical and metaphysical plains, a chaotic place that needs to be tamed by orderly man. 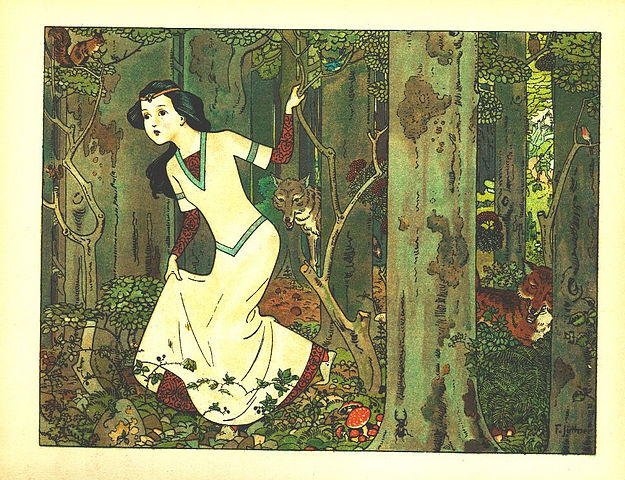 Forests abound in traditional fairy tales. Here Snow-White fears for her life in the forest after her mother’s betrayal (Illustration by Franz Jüttner).

The Amazon rainforest is firmly fixed in the shared imagination of Western Civilisation as the archetypal wilderness, filled with both beauty and danger. The rainforest became a zeitgeist in the shared consciousness of the West from the 15th century onwards, reaching fever pitch during the imperial expansions of the 19th century. The tropical rainforests, particularly in Amazonia, were perceived as being the biggest and most verdantly potent frontiers on Earth. Thus, making them the strongest dualistic opposition to Western societies ideal of order. Stories of great civilisations lost to the forest, like El Dorado and the Lost City of Z, maintained a wide popularity to since the days of Columbus. Bastions of order, designed by weaker societies, had succumbed to the most potent chaos. Colonial powers saw that it was their duty to bring the stronger Western civilisation to the tropics.

Many of the great authors of the 19th century, like Conrad and Doyle used tropical rainforests as the updated setting for the ancient Western myth. Civilized men would enter the chaotic realm and encounter beasts and savages. Here they discovered their capacity for good and evil, returning to society ennobled. This mirrors the tales of real world explorers and scientists who ventured into the forest to claim both objective knowledge and forgotten treasure. This synchronicity has left so strong a footprint on collective culture that we still feel it today in film, books and the medias portrayal of tropical researchers.