Radiosondes play an important role in modern day atmospheric measurements, providing high vertical resolution data (typically 5m) that cannot be obtained by other means.  Data from radiosonde flights is assembled into numerical weather prediction models and used by forecasters to assess movement of weather systems, cloud heights and predict fog.  Nowadays data from the upper atmosphere is relatively easy to obtain, but the development of technology to get us to this point has been long and arduous….

The first measurements of atmospheric parameters above the surface were made by kites in the mid 1750’s, starting with the work of Alexander Wilson, who carried a train of mercury thermometers, mounted at different heights on a kite string up to height of ~1km.   Kites were adopted as the standard method of measuring above the surface (see Figure 1) by several early meteorological services (including the US National Weather Service up until well into the 1800s), as the only alternative at the time was the manned balloon.   Manned balloons (which were first created in the 1780s by the Montgolfier brothers) provided a more stable measurement platform than kites, with the capacity to carry heavier equipment, as well as human observers.  However, the occupation of an aeronaut was a relatively dangerous one, with many meeting an early end through oxygen deprivation from flying too high (some have survived to altitudes as high as 10km without extra oxygen), or falling from the basket of the balloon.  Despite the dangers, many successful atmospheric measurements were made from these platforms, including those of Henry Coxwell and James Glaisher, who from 1862 to 1866 made 27 successful flights measuring pressure, temperature and humidity.  The expensive nature of manned balloons, as well as height limitations imposed by the presence of human observers did not make the manned balloon a particularly efficient platform for atmospheric research.    During the 1880s meteorologists had begun to experiment with free flying paper balloons, using their movement to determine wind speed and direction.  This idea was further developed by Hermite and Besacon (in 1892), who launched the first instrumented unmanned meteorological balloon made of gold beater’s skin, carrying a meteorograph to measure temperature. 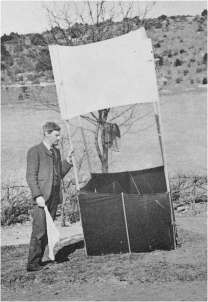 By the turn of the 20th century, unmanned meteorological balloons had become the standard tool for upper air measurements, which lead to the discovery of the stratosphere ( e.g Teisserence de Bort  and others).  The main limitation with these measurements was that since there was no known method to transmit the data back to the observer, the instrumentation had to be recovered after each flight, therefore real time analysis was impossible.  This changed with the invention of radio, enabling  French scientists Idrac and Bureau to successfully obtain radio signals from an unmanned balloon that reached the stratosphere.  Thus the term “Radiosonde” was coined, where “sonde” is French  for “probe”.  The early definition of a radiosonde was a balloon-borne payload that transmitted atmospheric parameters to a ground receiver via radio, and this definition has not changed to this day.  This paved the way for a spate of early radiosonde flights, including Bureau, who flew a bimetallic thermometer and barometer in 1929, and Molchanov, who launched the first operational radiosonde in 1930, where the data was relayed back to a Russian forecast center.  Many worldwide meteorological services developed their own radiosonde systems following this, including the UK Met Office, who created the Kew MK1, MK2 and MK3 radiosondes, which were used in the UK between 1939 and 1988.  The most successful design of radiosonde has been that of Vaisala from Finland, who’s radiosondes have been in use since the early 1930s (see Figure 2), and are now the most widely used radiosondes worldwide. 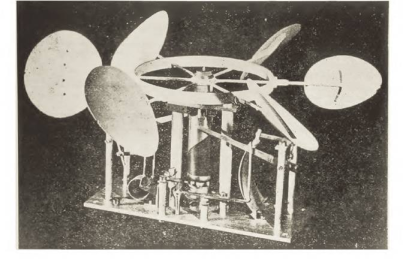 Figure 2.  One of the first meteorological radiosondes (Vaisala 1931)

Nowadays there are many commercially available radiosondes (Figure 3), all of which measure pressure, temperature and relative humidity as standard.  The position of the sonde can also be measured, either by LORAN, or more recently by GPS.  A typical maximum height for a radiosonde ascent is ~30km, although this depends strongly on the size of balloon, volume of gas used (either helium or hydrogen), and the weight of the payload.  Balloons drift with the wind and can often cover much larger horizontal distances than they travel vertically – typical horizontal distances can be around 100km.  Data is often available on the descent stage of a flight (which is slowed by parachute after the balloon bursts), provided the radio signal is strong enough to detect. Thus a radiosonde is capable of providing two profiles in separate locations on the same flight. 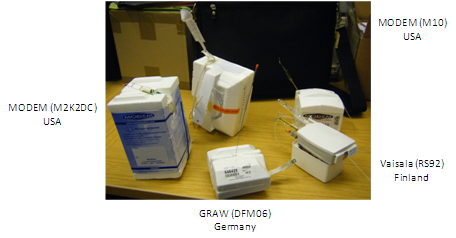 Although radiosondes only measure pressure, temperature and humidity as standard, some can be configured to accept data from additional research sensors.  Such additional sensors have included ozone sensors, which are widely used throughout the world for ozone monitoring – the UK Met Office launch one ozone sensor per week from their Lerwick station.  In addition, considerable research has been carried out into thunderstorm electrification in the US via additionally instrumented radiosondes.  The group of Marshall and Stolzenberg at the Univeristy of Mississippi has developed an electric field sensor, and charged precipitation sensor, which have made numerous flights into the heart of thunderstorms in an effort to understand the typical charge structure, as well as charge generation mechanisms in thunderstorms.  A balloon platform is particularly useful in this situation due to the substantial hazards to aircraft.

Over the past few years we have been developing at suite of additional science sensors at the University of Reading, as part of the MORSE project (More Operational Radiosonde SEnsors) with Prof Giles Harrison.  These sensors are designed to attach easily to the side of a standard meteorological radiosonde (see Figure 4).  Hundreds of radiosondes are launched around the world everyday, therefore an additional sensor package that fits easily onto an existing radiosonde flight can provide a wealth of extra data for little extra cost.  There are several constraints involved when designing instrumentation for radiosonde use including low cost, as the instrument is disposable, low weight (few hundred grams), low power (<30mA), and temperature stability as the typical temperature range encountered on a flight is +20 to -70°C.  In addition, a data acquisition system is required to interface the extra science sensors to the radiosonde, to allow the data to be transmitted via the radio link synchronously with the standard met data.  We have developed such a data acquisition system, which has been flown many times, with a variety of different science sensors.  These include sensors for turbulence, electrical charge, solar radiation, ionisation, aerosol particles and cloud droplets, some of which are now described. 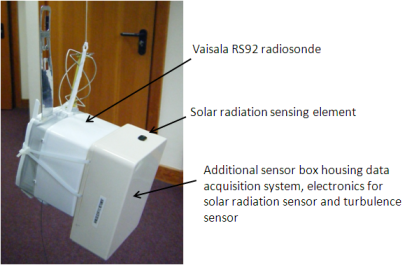 Figure 4. Photo of Vaisala RS92 radiosonde instrumented with extra sensors developed at the University of Reading.  The additional sensor package includes a data acquisition board, solar radiation and turbulence sensors.

The disposable turbulence sensor uses orthogonal geomagnetic field sensors (magnetometers), to detect rapid motion during a balloon flight. The variability in each magnetometer channel is used to detect motion (see Figure 5 for a flight through a cloud layer). As well as sensing potential atmospheric hazards, information obtained from this technique has already been applied in understanding the turbulent motion of the Huygens planetary probe descending to Saturn’s moon, Titan (see http://www.nasa.gov/mission_pages/cassini/media/cassinif-20070828.html for more details). 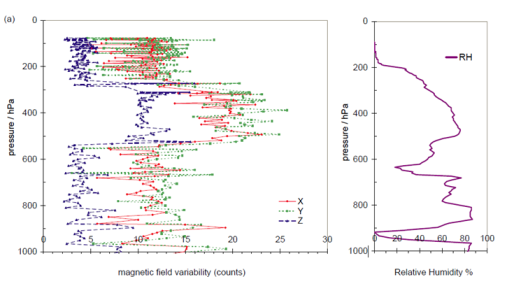 Figure 5. Vertical profile of variability in magnetic field from University of Reading turbulence sensor, plotted alongside RH measured by a  Vaisala radiosonde.  The increased RH at 600hPa denotes a cloud layer in which substantial turbulence was present.  Taken from Harrison et al 2007, Rev. Sci. Instrum. 78 (12). p. 124501.

Aerosol particles in the atmosphere are of ever increasing importance to atmospheric researchers, and was emphasised by the eruption of the Eyjafjallajökull volcano in Iceland during April and May 2010.  A balloon borne aerosol particle counter, developed at the Universities of Hertfordshire and Reading, was launched through the volcanic plume on 19th April, from Stranraer, Scotland.  The aerosol particle counter measures particle size and concentration using light scattered from particles drawn into a sampling chamber by an air pump.  Particles are detected in five different size bins from 0.6 to 10.6µm.  The balloon flight took place during the flight ban when UK airspace was closed, and demonstrates the usefulness of instrumented balloons in locations deemed too dangerous for manned aircraft to fly.  A 600m thick layer of ash was detected at 4km altitude, with a maximum particle concentration of 100 cm-3, and mean particle diameter of 1.4 µm (see Figure 6). 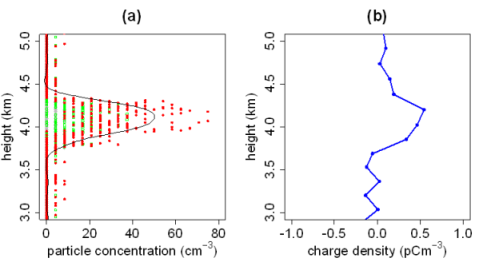 The characterisation of atmospheric dust is another area that has been investigated using instrumented radiosondes.  Dust particles contribute to the radiative balance of the atmosphere by scattering and absorbing radiation, therefore it is important to understand the transport of dust throughout the atmosphere.  Observations hint that dust particles can sometimes become vertically aligned, possibly due to electrical effects, which can alter the transfer of solar and terrestrial radiation through a dust layer.  It is therefore useful to determine whether elevated layers of dust are substantially electrically charged, for which balloons provide a suitable measurement platform.  The Saharan desert is the largest producer of mineral dust on Earth, therefore a good location to investigate atmospheric dust is the Cape Verde Isles, just off the west coast of Africa, which are frequently afflicted by Saharan dust outbreaks.  In the summer of 2009, several instrumented balloon ascents were made from Sal, Cape Verde, through elevated layers of dust.   These research radiosondes were instrumented with the data acquisition system, charge sensor and aerosol particle counter.  Two of the balloon flights measured large concentrations of dust particles in layers up to 4km altitude, which coincided with increased levels of charge, showing that the elevated dust layers were electrically charged. 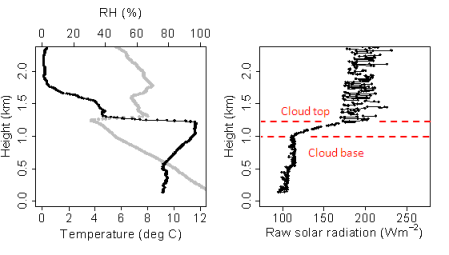 Recently we have focused on developing a range of optical sensors for use alongside standard radiosondes, comprising a solar radiation sensor and cloud droplet sensor.  These sensors provide finer detail about the transition from clear to cloudy air that occurs near cloud edges than thermodynamic measurements made by conventional radiosondes can provide (Figure 7).  The continued use of the long-established radiosonde as a research tool is limited only by the availability of suitable inexpensive sensors.  Consequently the development of novel types of balloon borne meteorological sensors will continue here at the University of Reading, with the aim to provide the existing operational radiosonde network with a range of specialised sensors, opening a new network of scientific measurements.