Sea ice in the Arctic has declined dramatically in recent decades, and we will most likely see summers with an ice-free Arctic ocean before the century is over. This has far-reaching consequences for the Arctic environment, for global climate, and for the way humans interact with the Arctic.

One of these consequences is the opening of new sea routes through the Arctic Ocean, which can shorten the travel time between Europe and China by as much as 40%. At present, it is impossible for non-ice-breaking ships to cross the Arctic Ocean even at the annual sea-ice minimum in September. However, with the continuing decline of sea ice, three passage ways will open. First, the North East Passage along the Siberian Coast, then the North West Passage through the Canadian Archipelago, and eventually it will be even possible to send ships via the shortest route crossing the North Pole (see Fig. 1). According to the most recent climate projections (CMIP5), by midcentury all these routes will be shippable, either by open-water ships or by moderately ice-strengthened vessels (Smith & Stephenson, 2013). 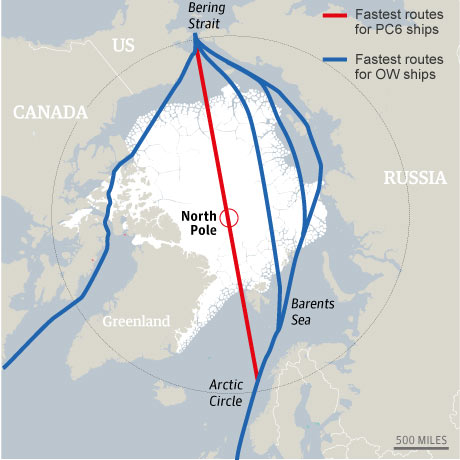 Matters are complicated for economic planners because the Arctic sea-ice cover exhibits large interannual variations, which can outweigh the overall declining trend for decades. As an example, consider two different but equivalent realisations of climate projections with the same climate model. Fig. 2 shows the simulated sea-ice concentrations in September for the same year during the 2010 decade. Remember that both of these realisations are equally likely and derived from the same model! In the first realisation, the North East and probably the North West Passage would be shippable, in the second neither would be. Hence, it would be of great economical value to be able to predict these large sea-ice anomalies.

Figure 2: September sea-ice concentration for two realisations of an RCP4.5 climate projection for the same year and the same model.

How far in advance can we ever hope to predict such large variations? This question can be addresses by so-called perfect-model studies, where the predictability of a simulated anomaly like in Fig. 2 is assessed by running a so-called ensemble prediction with perturbed initial conditions. Recent scientific results suggest that there is the potential to predict such strong sea-ice anomalies a couple of months ahead. That means it is potentially possible to predict whether either the low or the high sea-ice September conditions shown in Fig. 2 will occur when issuing a forecast, say, in spring of the same year. But the potential for such useful predictions rapidly declines as the lead time increases, i.e the earlier the forecast is issued (Fig. 3). When the lead time reaches two years, ensemble predictions made with the climate model are as bad as a simple climatological forecast, and are therefore not useful. Hence, although predicting the trend of sea-ice decline in the Arctic might become feasible with improved climate models, predicting its natural variations remains a tough challenge for science.

To find out more: